I was privileged to work at the Sanderson Farms Championship, a PGA Tour event at the Country Club of Jackson, in Mississippi.

A total of 950 volunteers, 40 PGA Tour/ShotLink staff, 70 from the Golf Channel and an additional 350, providing retail sales and catering, were on site. It is a massive operation.

How did I get involved? Early last year, a friend who had volunteered at the tournament for over 20 years asked me to consider working as a ‘walking scorer.’ 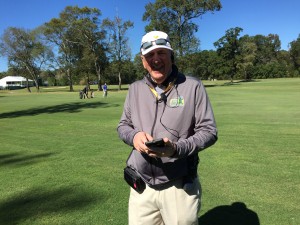 What could be easier than carrying a scoreboard for 18 holes and changing the occasional number!

When asked to report for my training, the truth began to dawn. I was not carrying a board, but entering three players’ scores into a palm-pilot and noting where their drives had finished and the area from which they were playing i.e. fairway, first cut of rough, deep rough, fairway bunker, greenside bunker, water or native area.

I also recorded if the player took a drop, either a free drop or under penalty, and if a provisional ball was played. When each hole was completed the scores had to be quickly double checked and verified leaving very little time to keep up with play. No pressure then! All this information, together with the laser operators providing measurements to the ShotLink control centre, was instantly transmitted to the on-course electronic scoreboards and the Golf Channel for worldwide transmission.

There was additional training for the 2017 event as the electronic hand-held devices had been upgraded.

On Thursday morning, the first players teed-off just after it became light at 7.20am with the driving range being floodlit from 5.30am! Plenty of gloves and woolly hats were on show. The course was in excellent condition with many players giving plaudits to the superintendent, Stanley Reedy, for the wonderful putting surfaces.Then followed nearly five hours of intense concentration as I recorded every shot for my group of players – not easy when there is sometimes an alligator nearby!

I had to enter the colour of each player’s trousers and top to facilitate identification by the TV production crew, commentators and laser operators. This went well until the temperature rose and each player peeled off his sweater to reveal a different coloured shirt underneath. I hadn’t anticipated this and had to immediately radio in to the control centre to prevent certain confusion. As the only point of contact with the control centre, I was also responsible for actioning any player’s request for a rules official and this had to be done without any delay. I will have a great deal of respect for walking scorers in future!

At the end of the round I joined the players in the recorder’s office to answer any queries about the scores. One of the first round leaders, Ryan Armour after a 66, was eventually crowned the champion with a five shot victory over Chesson Hadley. It was his first PGA Tour win in his 10 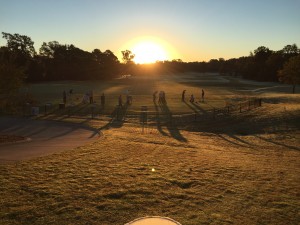 Another highlight was a guided tour of the ShotLink truck where all the data from the walking scorers and laser operators is processed prior to transmission to many on-course electronic score boards and to The Golf Channel.

The amount of data gathered and statistics produced is simply mind-boggling. It is used on the day during live TV transmission and is analysed after the event by players, coaches, caddies, officials and many followers of golf around the world.

It was a privilege to learn at first- hand what goes on ‘inside (and outside) the ropes.’ My abiding memory of the whole event was the enthusiasm of all the many hundreds of volunteers some of whom had been continuously involved for over 20 years.

From the daily 5am floodlighting of the range until the final match was concluded, and the scores verified, the volunteers completed a huge variety of responsibilities with an enthusiasm that was infectious!

It became our event and that was obvious to players and spectators alike. Each of us made
a payment of $45 towards the cost of the uniform provided (hat, shirt and jacket) and food supplied during each shift from Monday until Sunday. Enthusiasm costs nothing but it is both inspiring and uplifting. This is something to be harnessed and utilised when our own clubs run an event, be it a Captain’s Day, charity day, County or Union fixture.

Everyone involved can be a part of the experience, with a shared commitment and enthusiasm, which lifts player and volunteer alike.This can help build bigger volunteer teams, produce greater team spirit and, ultimately, enable us to attract more members to the truly great game of golf.