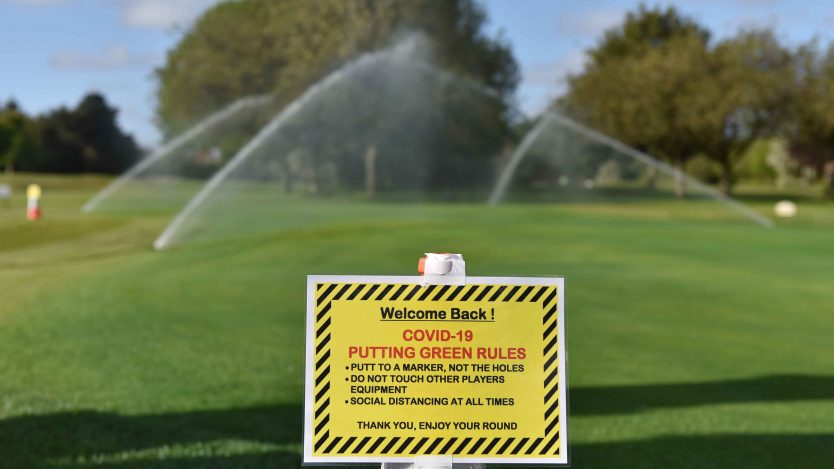 As the prime minister laid out his roadmap for loosening the coronavirus lockdown, a key Government figure revealed the date English golf clubs will reopen The date for golf courses reopening in England will be March 29, a key Government minister has revealed. As prime minister Boris Johnson unveiled his roadmap out of coronavirus lockdown to the House of Commons, Nadhim Zahawi, the vaccines minister, had earlier confirmed golf's return on BBC Breakfast. Establishing that schools would reopen on March 8, he added: "On March 29, we will see outdoor sports, and of course, the ability for two families or the rule of six to meet outdoors." Asked to be clear on what that meant in terms of socialising, and being able to see family and friends, Zahawi continued: "So on March 8 it's two people being able to meet outdoors for a coffee or socially. On March 29, it'll be two families or the rule of six meeting outdoors and outdoor sports: tennis, golf and other outdoor sports, including team sports, will return." Golf clubs in England have been closed since the third Covid lockdown came into force on January 5. They've remained shut despite entreaties from England Golf and the All-Party Parliamentary Group for Golf, who earlier this month issued a report - backed by scientific advice - claiming golf could safely be played during lockdown. Addressing Parliament, where he laid out a four step plan for reopening, Johnson said: "As part of step one, we will go further and make limited changes on March 29 when schools go on Easter holidays. It will become possible to meet in limited numbers outdoors, where the risk is lower. “So the rule of six will return outdoors, including in private gardens, and outdoor meetings of two households will also be permitted on the same basis, so that families in different circumstances can meet. "Outdoor sports facilities such as tennis and basketball courts, and open air swimming pools, will be able to reopen and formally organised outdoor sports will resume, subject to guidance. "From this point on March 29, people will no longer be legally required to stay at home, but many lockdown restrictions will remain. People should continue to work from home where they can and minimise all travel, wherever possible.” Johnson added non-essential retail, which would include pro shops, could reopen from April 12 if conditions are met, while up to six people could meet outdoors in pubs from that date as part of the second step. The PM told the Commons the third step, which would come into force no earlier than May 17, would remove the rule of six requirement outdoors, while allowing two households to mix indoors in pub and restaurants. Johnson outlined the potential for all legal limits on social contact to be removed from no earlier than June 21. A published document on the Government's website, gov.uk, called Covid-19 Response - Spring 21, gave more details on the Roadmap steps and said of the March...
This is member only content