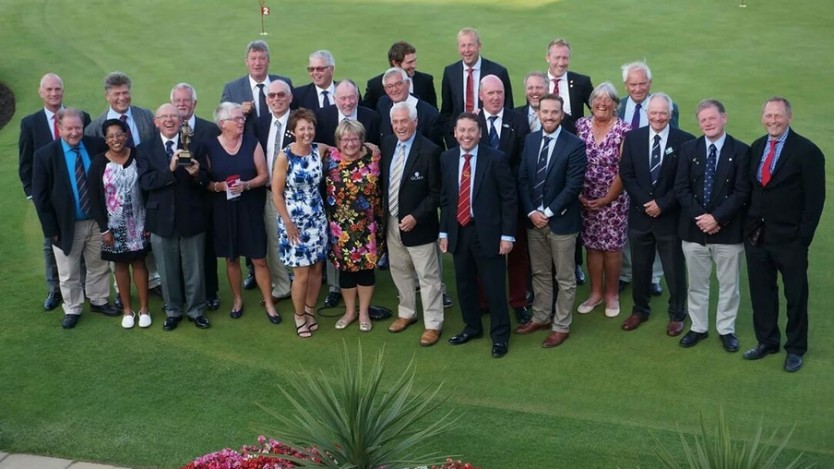 The French invasion took place on July 29/30 at The Berkshire. This event has gone from strength to strength, initially between a group from the South East but now rapidly becoming a desirable fixture for GCMA members to play in. The organisation was first class, thanks as usual to John Edgington and to the fine efforts of Donald Gregoire.

Tradition has it that the South East Captain is the team Captain, and John Aughterlony made a “grammatically perfect, flowing and tense perfect” French response when called so to do. The team played exceptionally well against some strong opposition and eventually prevailed by a handsome margin over the two days on both the Red and Blue courses at The Berkshire to win the Presteege Cup. Peter Foord was a very welcoming host, as always, and the comments from both GCMA and French players were very generous.

Next – the Swedes! An additional match this year due to its popularity. Normally played twice in three years, it was agreed to revert to yearly and Will Sjoberg put all the arrangements in place, with the aid of the mysterious ‘Pablo’ who was a mere spectre of the 16th player on both teams. (teams comprised 15 players only).

Played on three of the finest courses in the south (Broadstone GC, Brokenhurst Manor GC and Ferndown GC), the match was drawn at 4-4 after day one and a fiercely competitive day two saw the GCMA team edge ahead to win by 5-3,  9-7 overall and regain the Knalle Trophy. One of the amusing features of this match is to hear an account from one person in each match about how the match went, who played well or the reverse, how the luck went, how the skill shone through, what the excuses were and the reason for either a very unlucky loss or the brilliance of an amazing win. All is taken in a good spirit and is typical of the whole event. The camaraderie engendered in this match was quite obvious, and now in its 11th year it will go from strength to strength. Thanks to all players on both sides for the companionship displayed and, of course, many thanks to the three clubs for their generosity in allowing the event to be staged in such fine golfing territory.

Unfortunately the weather was awful on the President’s Day, and torrential rain soon found its way into every crease in rain suits. After reaching the 13th hole, play had to be abandoned due to conditions being unplayable, but my wife and I were invited back in drier conditions before returning home.

To make the trip even more memorable, we also played Powerscourt GC, a great course with many, many slopes on the greens and some lovely views, and also Bray GC where Alan is the manager. Holes here gradually climb to the highest point where the view suddenly opens up across the sea. A very challenging and enjoyable course, as were all three, and my thanks for the hospitality we were accorded go to all three managers.

I hope the season continues to be successful for all clubs, and especially those who work so hard to organise and promote this superb game we all enjoy.