The Golf Club Managers Association (GCMA) is looking to the future, after two new directors were elected to its board at the association’s 2020 AGM. 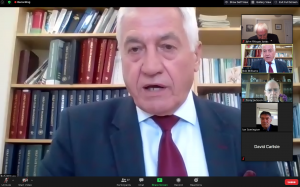 Consisting of serving managers and industry professionals from around the UK, the board reflect the age and gender demographics of the association’s 1,500 members.

Held for the first time online on Monday 22 June 2020, the members gathered via the weblink at the GCMA AGM to discover the result of their votes for the election of directors.

After a collation of the postal votes, the election results were announced by the association’s Chief Executive Officer, Bob Williams, who was residing over his last AGM before his retirement in August.

The association’s newly elected directors were;

They join current members of the board who are:

The AGM also punctuated one further change, for the out-going Chairman Phil Grice, General Manager Royal Norwich. Therefore the Board elected to accept Brad McLean as the new Chairman.

The skills based board of directors support the team of staff based at Bristol & Clifton GC, alongside the President and Captain, who work closely with, and are supported by, 16 Regional Managers from all parts of the UK.

I am delighted to welcome the new directors to the GCMA board, and look forward to their support for the future success of the association alongside the incoming CEO, Tom Brooke upon my retirement later in the year.  It’s the start of a new decade and the golf industry faces a great deal of change and many different challenges in the forthcoming years.  I know this Board will seek to maintain our values for professionalism and leverage the cumulative wisdom from our 87 years as community to serve the members and the golf club managers that will follow in our footsteps.

I am also sincerely grateful to the unsuccessful candidates who put themselves forward, and wish them well for the future.

David Carlisle’s tenure as the GCMA 2020/21 National Captain was also confirmed. The former secretary of Woodsome Hall GC took over from Ian Symington who was applauded for a lifetime of mentorship and inspiration for fellow managers and received a lifetime membership.