Hesketh: This GCMA club is famous for… 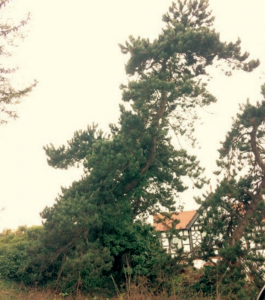 At this Southport course, run by Martin Edge, is a tree with a very unusual story…

Golf may not have been part of the Olympics for more than a century, until Justin Rose grabbed gold in Rio in 2016, but in 1936, under the watchful eye of Adolf Hitler at the infamous Nazi games, the sport provided an intriguing sideshow to the main event. Ten days after the Fuhrer had presided over the official competition, seven two-man teams went head-to-head at Baden-Baden for the Golfpreis Der Nationen – The Great Golf Prize of the Nations. Even with war still three years away, distaste with the German regime was growing and, of the 36 countries sent invitations, only six accepted the entreaties of German Golf Union president Karl Henkell.

One of those was the English, who sent Hesketh member Arnold Bentley and Ganton stalwart Tommy Thirsk to represent them in a 72-hole tournament where the scores of each player were combined.

At first, it all went well for the German duo of Leonard von Beckerath and CA Helmers. Holding a five shot lead going into the final day, German foreign minister Joachim Von Ribbentrop sent word to Hitler of an imminent home win.

As the dictator drove from Berlin to present the prizes to his charges, the English duo – thanks partly to two course-record 65s from Thirsk – surged to victory by four shots. It’s said Hitler, learning of the failure while in passage, furiously ordered his chauffeur to turn the car around. Henkell conducted the ceremony. Along with the trophy and two gold medals, Bentley and Thirsk were presented with an unusual prize – a small fir tree.

Bentley’s tree found its way back to Hesketh where it was planted close to the clubhouse. It survives to this day but had to show incredible fortitude to get through the war. Nicknamed the ‘Hitler Tree’ by members, it was frequently used as a urinal, which probably accounts for its rather unusual shape today. The trophy went missing for many years until it was unearthed in 2004. Hesketh raised the money – around £15,000 – to buy it and it resides in the clubhouse.