A Prince among courses: The people behind the redesigned Himalayas course

The redesigned Himalayas course at Prince’s has been labelled a triumph.  We talked to the people who made it happen…

It was 7.01am when the first competitive shot was hit, a drive struck in a squall. The gusts were hitting 45mph, flagsticks clung grimly to the holes, the rain menaced, and the ball threatened to come backwards.
Yet there was a queue on the tee. And all the men were still going off the whites. When they had waited so long to play Prince’s new Himalayas course, not even Mother Nature was going to stop the members in their tracks.

They’d watched with curious eyes as architect Martin Ebert took their favourite nine and almost redrew it entirely over the better part of a year. 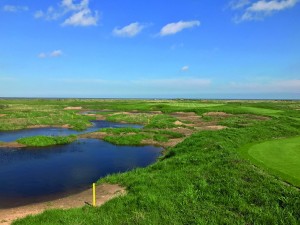 The Shore and the Dunes are the loops that always brought the Sandwich club acclaim, but it was the Himalayas that was the closest to the hearts of those who played at Prince’s most frequently.

It takes courage to meddle with emotions, and history, with the course having stood as a monument to 1950s design principles. But the McGuirk family, who’ve owned the club for two generations, pushed forward. Not that they are saying this is a redesign, rather a re-imagination. Well, someone clearly had some big dreams.

If you are going to show ambition, then hiring the team that turned Turnberry’s 9th into one of the world’s most spectacular par 3s, or could envisage the two new holes at Royal Portrush that will stun spectators at next year’s Open, was a masterstroke.

“You have to describe Prince’s as perfect links terrain,” said Ebert of his first impressions of the stretch of turf that has been the club’s home for more than a century.

It’s land that’s withstood not only the most severe examinations by the weather but the bombs and barbed wire of two world wars.

“It’s beautiful sandy soil, with fantastic links undulations produced by the natural wind. It’s a great tract of land, and plenty of room for it characterised by these parallel ridges to the ocean.”

Even if the members didn’t feel the same way, the Himalayas was the awkward child of the trio of layouts. If visitors didn’t ignore it, it was reluctantly embraced. And as far as the McGuirk family were concerned, it didn’t hit the championship standard of its other siblings. You couldn’t argue that now.  “When we first talked to Martin about it, we’d had a number of the top 100 people come down and they said ‘it’s a really strong 27 holes but you haven’t got any signature holes’,” explained general manager Rob McGuirk.

“It was ‘every par 4 is a similar length, there’s no risk and reward and you don’t have any holes facing the sea’. When Martin came, we said ‘these are the observations we have had over the last 10 years’ can we integrate these things into the Himalayas? He filled the brief.”

As is his firm’s wont, Ebert delved into the archives with staff architect Mike Howard, unearthing old photos and scattered aerial shots – any scrap that could give them a hint of how the course developed. But a simple restoration, however, was not in their minds. Only the first hole remains recognisably the same as the original design.

“There was the opportunity to get tees up onto higher ground, up onto these ridges – to create different angles for the tee shots and also to give beautiful views of the sea,” added Ebert. 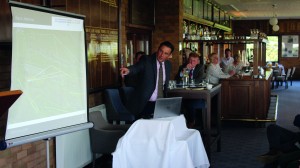 “There was a really big decision for Rob and his father to make – from two options. One was to keep the holes exactly as they were and the other was to introduce a par 3 at the far end of the course.”

That hole, the 5th, is the one that’s rightly attracting all the attention. Ebert took a relatively flat expense of land and transformed it into an eye-catching par 3 – replete with wetlands and the view of the water the McGuirk’s craved.
“One of the big characteristics was to try and get this green to
blend in with the others on the course. That was a real challenge,”
said Ebert.

“The green was probably raised up by about a metre and a half from the lowest point and the tees were three or four metres. We really wanted to get that view of the ocean as a backdrop and give the golfers a special experience – standing on that tee and feeling as though they’ve got that bit of elevation. “It’s a huge area for a relatively short par 3.

“The Postage Stamp was mentioned but what people don’t realise is that the Postage Stamp is only open during the summer.
“We really needed to produce a green big enough for all the golf that is played on a busy course.

‘What we ended up doing was creating a larger green but one with so many different flag positions on it, and if you miss in the bunker on the left or down the bank you will be in trouble. “Because of the size of the green,
if you don’t hit the right part then three putts are probably more likely than two. It’s a special hole ready for us to go out and enjoy.”

Installing the 5th meant losing the 2nd as it was. So Ebert got creative, combining the second tee with the old third green and producing a 600-yard plus par 5 that sweeps around the wetlands to a large and gently sloping putting surface.

Of all the work that took place, this was the design that stood out most to McGuirk. “Five was always going to be good, because it’s brand new,” he explained. “We said ‘you can do whatever you want here. We just want it to be special’.

“Someone like Martin is always going to make it really good. But with two, we couldn’t really see it throughout any of the growing in and were saying ‘are we really sure about this?’ There were 200 trees down behind the green, which we took down, and then it started to take shape.

“Even three weeks before opening, we had no grass down on that middle bit of fairway and we overseeded with rye just to get it going. That hole played brilliantly downwind. I think into the wind it might be slightly different.”

McGuirk drew on some of the classic American courses – Streamsong, Whistling Straits and National Links of America – when outlining his intentions to Ebert.  But even he admitted he was a little surprised by the hugely positive reaction from visitors and members alike when the altered course finally came into play.

“It was better than I thought it would be. When you walk it, you don’t see it. To play it and see where the ball is landing, it visually stood out to me – particularly the second hole round the corner.

“I haven’t had one complaint from the members through the whole process. They’ve liked going down there because they have seen the changes.”

Now they are seeing more, with Ebert already at work on aspects of the Shore and Dunes course and developing a new masterplan to integrate those more with the Himalayas.

Prince’s finest hour came in 1932, when Gene Sarazen won the Open there. In the middle of a golden triangle of courses, with Royal St George’s and Royal Cinque Ports close neighbours, they’ll be hoping those old glories are about to become more than mere memories. The re-imagined Himalayas is the perfect start.