Amy Yeates is crowned the GCMA Manager of the Year 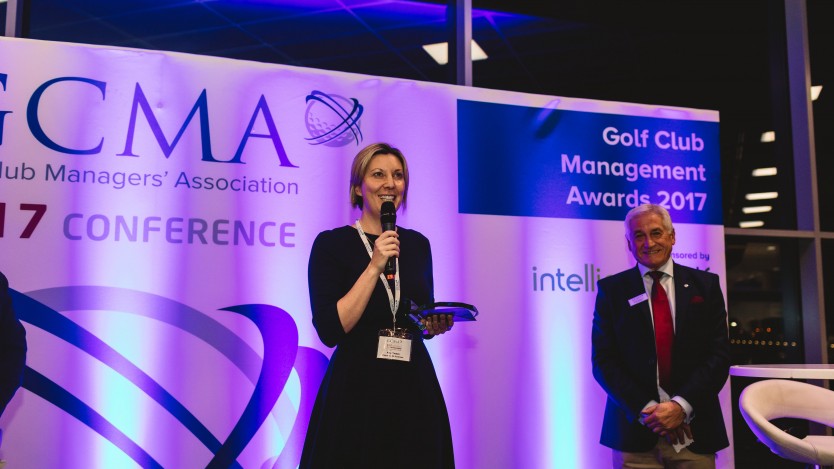 Director of Golf, Spa and Leisure at Fairmont St Andrews, Amy Yeates, has been named the GCMA Manager of the Year, and Pyle & Kenfig and Gordon MacLeod also picked up awards.

The most prestigious awards in golf club management took place at the GCMA 2017 Conference at Mercedes-Benz World in Surrey on Monday night.

Amy Yeates, described by her nominee as being at the forefront of the evolution of golf in Scotland, received her award from Jamie Abbott – MD of intelligentgolf, and her prize includes a trip to Thailand in association with Coco Golf and Thai Airways.

The judging panel was particularly impressed with the way Amy helped to drive through a new flexible membership scheme at Fairmont St Andrews, while providing inspirational leadership for her team.

Amy’s inclusive style helped her build and motivate her team through trust and empowerment, which has resulted in steadily increasing revenues and green fee yields – all the more impressive considering the highly competitive area the club operates in.

Bob Williams, GCMA CEO, said “The GCMA Golf Club Management Awards reward the exceptional work that goes on in our industry, and Manager of the Year is the greatest honour. This was perhaps the hardest judging process I’ve been involved in – the standard of the finalists was exceptional – and Amy is an outstanding winner. It’s clear she’s a passionate manager who cares deeply about her team, and we were particularly impressed with her vision for the industry.”

The Team of the Year prize, sponsored by Golf HR and presented by Carolyne Wahlen, went to Pyle & Kenfig – secretary Simon Hopkin, professional Dylan Williams and head greenkeeper Paul Johnson, who have had a huge impact at the South Wales club. Green fees have increased year-on-year by 7.5 per cent – and the club receives consistently strong customer feedback. Some 65 new members arrived as a result of strong marketing techniques and the club has created a pathway that has resulted in a significant increase in junior membership.

The first award of the evening, Newcomer of the Year, was presented by Richard Wood of Colt Mackenzie McNair to Gordon MacLeod from St Ives (Hunts).

Gordon MacLeod was a member at St Ives for five years before taking on the role of general manager in July 2016, inspired by his love for St Ives – and his desire to provide a period of stability following a succession of previous managers.

His energy and attention to detail has brought huge results. Membership rose 14 per cent between February and July, he has established regular contact with England Golf and developed partnerships with local media companies to spread the word about the club. With the club also the home of Titleist’s National Fitting Centre and a centenary on the horizon in 2023, St Ives are moving from strength to strength with Gordon at the helm.

Congratulations to all the finalists, and especially to all the winners!

« Older Who will be crowned GCMA Manager of the Year?
Newer » Meet The GCMA | Neil Annandale