Collecting the most prestigious award in golf club management, James was hailed at a glittering gala dinner during GCMA 2021 Conference at Wyboston Lakes Resort in Bedfordshire.

An audience of nearly 300 heard how James was described by directors at the West Sussex club as the “true definition of a team player”.

Helping to support the club’s path to relocation while growing revenue and the bottom line, James has overseen a £500,000 improvement in turnover and, in the last five years, a 42 per cent increase in membership.

He follows in the footsteps of Enville’s Heather Mulley, who was crowned in 2019, and Amy Yeates, who won the Manager of the Year prize in 2017.

He said: “This is an absolute honour. I have been a GCMA member for eight or nine years now. I am extremely proud of this Association. I am proud to be a member and they do an absolutely fantastic job for us as serving managers.”

He added: “I am also extremely proud of the Southern region. This isn’t possible without an absolutely incredible team in the background – as I am sure everyone who has ever been lucky enough to win this prize will say.

“I’ve got an incredible team, a young team. They care about what they do.”

Nominated by a club president and former captain, sustainability was said to be at the heart of the team’s vision for the club and a new five-year course development plan is in place. The team, collectively, have 76 years of service to the club.

Picking up the award on behalf of the team, Robin said: “This has obviously been a very difficult few years and we’re very proud just to be nominated – let alone win it.

“This was won not just by us but by a lot of people in the background and we’re very proud. We just can’t wait to have the next board meeting at Seacroft Golf Club!”

The first award of the evening was Newcomer of the Year and went to Lincoln’s Louis Booth.

Club directors behind his nomination described him as “highly popular and respected” and added they were “incredibly fortunate to have Louis as a member of their team”.

Helping with the development of women and junior golf opportunities at the club, he has been a project leader in a number of initiatives – including a new TrackMan studio and driving range development – and secured more than £80,000 of grants during the pandemic.

Louis said: “It’s a bit of a shock to be honest, being alongside Sam (Foster, Whitby) and Gary (Beves, Goodwood), who have both done phenomenal jobs at their clubs, and a massive congratulations to them for all their hard work over the last couple of years.”

He added: “The last year I have learned a lot. I’ve been very lucky to [be] at such a great club at Lincoln, and the team I have got there, and I am really looking forward to sharing this with everybody when I get back.”

Tom Brooke, GCMA Chief Executive, said his first GCMA Manager of the Year Awards process had been extremely challenging, but extremely rewarding too.

“I’ve really enjoyed being part of this,” he explained. “It’s been really inspiring for me to visit all the clubs that have been nominated by fellow GCMA members, or by their boards, or chairpersons. It has been inspiring to visit clubs and spent time one-to-one with some absolutely superb golf club managers and teams.

“I would like to thank everyone who has been involved in the process, for welcoming me to your clubs, and I’ve really enjoyed it. It has been one of the most enjoyable parts of my first year or so with the Association.

GCMA Manager of the Year

Team of the Year

Newcomer of the Year

Do you subscribe to the GCMA’s weekly E-newsletter? Make sure you’re not missing out on the latest in the world of golf club management. Click here to join in.

« Older‘We hope you’re looking forward to Conference as much as we are’
Newer »Wide smiles and long celebrations: GCMA 2021 Conference was our best yet 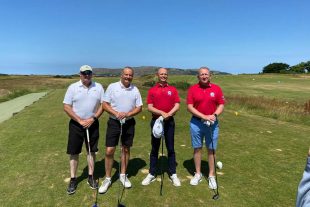