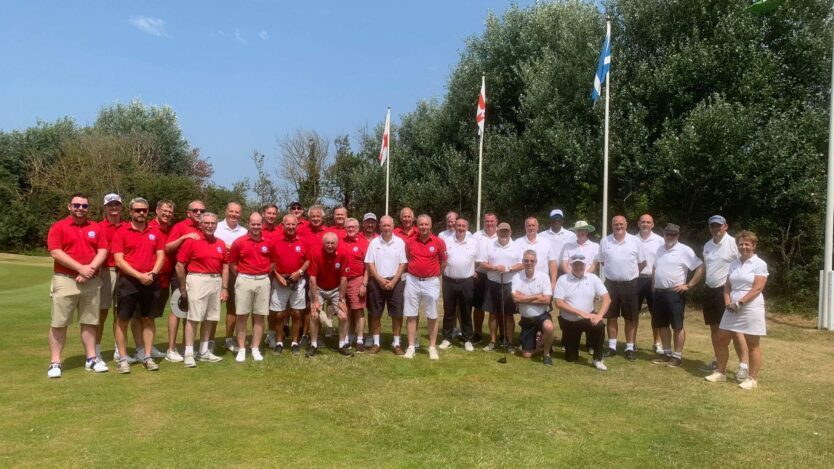 Cameron Dawson, GCMA English match co-ordinator, takes you through the 2022 season so far... It was a good feeling to be able to organise the matches this year with some degree of certainty that they would actually go ahead. These are the first matches for our National Captain (or I suppose that should be England Captain for the Welsh match) and I hope he enjoyed them as much as I did. We also included Immediate Past Captain Dave Carlisle in the England team for both matches as he missed out on most during his two year stint for some reason! We have now played half of our annual four matches and both were at home. The first was against the Irish at Crowborough Beacon and Royal Ashdown Forest. It is always a difficult game against the Irish and this year was no exception with us losing 9-3. I think that the Irish version of WHS is different to ours, but it was great to see some old faces and new ones on both sides. We fielded quite a few new younger players and kept to our aim of the players reflecting the membership with eight serving and four retired members playing. I hope we keep these on board for future games. The second match was against the Welsh at Burnham & Berrow. What a wonderful setting but, just like the media coverage, our conversation and concerns were based around the heatwave we were experiencing. Temperatures were hitting mid 30s on both days. We moved to a two-day match this year for the first time and I like to think it was a success and that it remains the format going forward. On this occasion we did manage to regain the trophy lost at Royal Liverpool last year with a 9.5-6.5 victory for the English. Again it was great to see friends old and new and especially to see a team from Wales with so many young, very young in some cases, scratch and plus handicap players. We have two more matches to come. We will face the Scots up at Castle Stuart Golf Links in early August and then, after what seems a very long break, the Swedes in Gothenburg in September. If any member isn’t on my contact list for the matches and would like to be kept informed of future match details - outside the reports and announcements in the newsletter and magazine - please drop me a line on [email protected]  We will continue to try and give as many players as possible a game in these important networking, competitive and social matches. Do you subscribe to the GCMA’s weekly E-newsletter? Make sure you’re not missing out on the latest in the world of golf club management. Click here to join in.
This is member only content

« Older What do you know about the new sickness rules?
Newer » GCMA Accreditation: ‘We’re really hoping managers will engage with this’