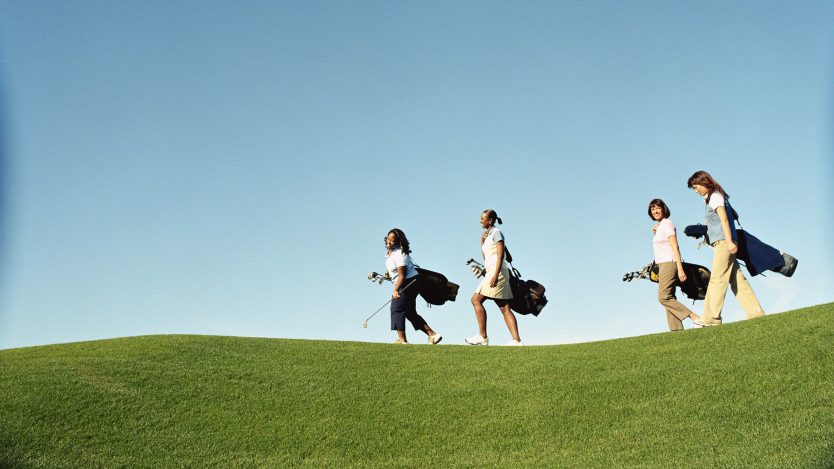 The team from BRS joined Leighton Walker, and GCMA professional development manager Gavin Robinson, in a joint Know How webinar and Golf Club Talk UK podcast to look through the latest numbers…

Golf’s pandemic participation boom has begun to slow – but the numbers of people playing the sport are still well up on pre-coronavirus levels.

In a GCMA Know How webinar, and GCMA Insights podcast on Golf Club Talk UK podcast, Kevin Murray and Karen Moss, from BRS, went through the latest UK and Ireland golf participation numbers for the second quarter of 2022.

They revealed that the number of member rounds played in England between April and June were one million down on the same period in 2021.

But that 3.5 million total was still 1.6 million more than in 2019 – showing that despite the return to work from furlough, and the country fully exiting Covid restrictions, the interest in playing golf was still strong.

That was 300,000 down on last year but remained 300,000 up on 2019. Northern Ireland recorded half a million member rounds and Wales 300,000 – both down on last year but still an increase on pre-pandemic levels. “Golf is still in a pretty healthy position,” said Murray, who added that BRS member numbers – that is those golf club members whose clubs used the BRS system – remained fairly static at 675,000 this year.

“We’re probably now at a point of retaining members as opposed to acquiring new members,” he explained.

Revealing that around 14,000 golfers took part in the survey, Moss said a specific question had been asked around the cost of living and whether members viewed playing golf as a luxury or a necessity.

Just over half of respondents said it was a necessity, while around a third revealed it was a luxury, and around 15 per cent weren’t sure either way.

“We were really interested to find out about this because we all now fully realise the impact of the cost of living crisis and it’s not just about inflation, fuel prices rising, and wages not increasing in line with the cost of goods and fuel,” she said.

“We know there is a big impact coming and perhaps we still haven’t fully felt it. This winter could be pretty intense for a lot of households.

“Do people still think that in the light of that cost of living pressure on household incomes, and the fact that so many new members have joined over the last few years, we thought this was a pertinent question to ask.

“Do people still think that their golf club membership is a necessity? We found that the majority of them do think it is still a necessity.

“But we did have a third saying they considered it to be a luxury item so it’s definitely something golf clubs will want to keep an eye on towards autumn and winter when the cost of living starts to impact even more.”

Moss said BRS were encouraging clubs to make use of custom payment schemes and keep an eye on members to see who was and wasn’t fully utilising their membership. That would give clubs the best indication of who was a possible leaving risk.

For an in depth look at the figures, watch the video above, click here to view it in a standalone window, or listen to the Golf Club Talk UK podcast.

Do you subscribe to the GCMA’s weekly E-newsletter? Make sure you’re not missing out on the latest in the world of golf club management. Click here to join in.