In conversation with David Morgan

David Morgan has three courses, two clubhouses and 81 staff to lead as secretary manager at Gullane. And, he’s also got two large tournaments to consider this year as well…

One golf course is often enough for a manager but Gullane has three. With the events you hold, it must be a big job…

Gullane has been fortunate over the years to be chosen to host numerous events. We have an honours board in the members’ clubhouse that lists the various championships we have hosted. But the step up over the last couple of years has been to host a European Tour event. Next month is our second hosting of the men’s Scottish Open and this time round we’re staging the ladies’ event as well. Aberdeen Standard Investments wanted a single venue for the two events so it was fantastic they chose us. We held the Scottish Open three years ago and people asked me ‘was the event a success in 2015?’ From the feedback we got it was, but more importantly from a members’ point of view it was also a massive success because there was so much involvement. They really got behind it.

What sort of club is Gullane?

Gullane is your epitome of a Scottish golf club. It has a very diverse membership because the golf is the glue, if you like, for everyone. We have all skills and walks of life in our membership, from local builders and plumbers, to Edinburgh lawyers and surgeons, and when they get on the golf course they all just play golf together. Golf up here is very good at that. It’s all about playing the game they love.

You were previously at Broadstone for four years. It’s hard not to be excited by Gullane though…

Broadstone was a fabulous club to work at, but when this role came up it felt like a step up and also a chance to get back closer to our family. Following three interviews, I was fortunate enough to get the position. When I started, the club were just kicking off a £2 million refurbishment of the clubhouse, as well as hosting the Scottish Open the following July. I started in the November and the clubhouse was three or four months into its build and was due to open in May. We had the Scottish Open in July so the first seven or eight months was a bit of a rollercoaster for us trying to get everything lined up. But there’s a great team at the club and they really buy into making sure we provide a great facility. 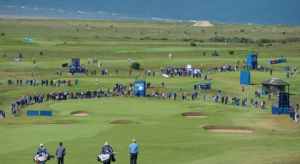 The East Lothian coastline, Scotland’s Golf Coast, is blessed with 22 golf courses and I don’t think there are any bad ones on that stretch. Muirfield has a huge history and is, of course, an Open venue but North Berwick is just as famous for its history and course design.
Gullane, I think a little bit, lived in the shadow of Muirfield. Certainly, in terms of hosting events, it’s probably come to the fore a little bit more now though.

But the land along the coast is just perfect golfing territory. We get feedback all the time about the quality of the playing surfaces. We were stimping greens at over 9.5 foot in December! Not just fast, but also true.

It’s fabulous. It’s one of the great things of links golf. Golf is in the blood on the coast. Gullane village is a bit like St Andrews where you can go into the local Co-op or Tesco Express and there’s a set of golf clubs standing outside the door and there’s a guy in the queue with his golf shoes on.

That’s the charming thing about golf on that coast. It starts and ends in the village. The village is very much part of the club as well.

July is going to be an exciting month…

The Scottish Open is obviously a big event on the European Tour schedule and has become part of the Rolex Series, which sees the prize fund this year go up to around seven million euros. It’s the week before the Open and it’s always been used as a bit of a run into the Open. We had some nice feedback in 2015, when Rickie Fowler was the winner, so it is really exciting and the Tour are a great bunch of guys to work with.

They are very professional and the Tour is an exciting proposition just now. They are looking to try and change things up a little bit.

It’s always a challenge when you close the course for a month to your members. That is difficult. We are lucky though, we have got a composite course which we’ll make up using holes that are not in use for the Scottish Opens. It’s good fun. It will have a CSS and they will be able to play competitions on it.

The Championship course is 16 holes of No.1 and two holes of No.2, which takes out the No. 2 course. The 18th on No. 3 is where the players’ lounge and range are so all three courses as an entity are gone for that period. We’ve also got limited access in the week between the ladies and the gents where we will be able to play the championship golf course.

It’s quite exciting. They will play the same holes the European Tour players will with all the stands up around 18 and the various stands around the course. It creates a bit of a buzz. I was fortunate that I played in 2015 on the Monday and we played it from the proper tees. You realise how far these guys really hit it when you are standing at 7,200 yards. They just make it look so easy.

What sort of planning goes into staging events like this?

It’s fun to be involved in that. The infrastructure/build starts six or seven weeks out.

We are really fortunate that we have many volunteers from within the club who take up the marshalling and scoring roles and all the other clubs come in as well. It’s like the Open.

We have 16 local clubs who come in, take a hole each, and marshal it. To give you an indication of the number of volunteers, just from Gullane we have over 320 volunteers, and we’re looking at about 800 volunteers in total to run the men’s event.

So the whole town comes out?

Pretty much. The last time round, I remember walking along one morning in the village and Graeme McDowell’s sitting in the coffee shop window having a coffee. It’s quite surreal but the village really buy into it. Most of the people in the village are golfers and it’s a real jamboree of golf.

It’s great to have the women’s event as well. They worked really well together at Dundonald and created a real buzz…

The ladies event and the field at Dundonald was incredible. I think they had eight or nine of the top 10 ladies in the world and 25 out of the top 40. It’s a very strong field because it is co-sanctioned with the LPGA Tour and it has seen a big increase in the prize pot as well. When it was a European Tour ladies’ event, I think the prize fund was about 400,000 euros. It’s now around 1.7 million dollars.

It’s a big step up for the ladies as well and it’s very similar to the men’s event too. It’s a warm up for the Women’s British Open the following week. It works well.

You are among all this golfing history at Gullane. Coming into work must be a delight…

I have to pinch myself sometimes just to realise how lucky I am. I have been fortunate and worked in some great venues around the country. But Gullane is definitely up there as one the top members’ clubs and the heritage and history that it has is incredible. There are a lot of big golf venues, but to have 1,800 members at one club over three courses – I don’t think there will be many bigger member owned golf clubs in the UK.

Gullane Golf Club Golf has been played over Gullane links for more than 350 years but the club was established in 1882. Gullane No. 1 is the oldest course there by 14 years, while Willie Park Jnr established No. 2 and No. 3 in 1898 and 1910 respectively. They offer very different challenges with No. 2 renowned for its testing short holes and No. 3 focusing on shot making skills. This year, the Scottish Open for men and women will be held at the East Lothian venue.

« Older Month In Pictures
Newer » A Matter Of Opinion: Working Together