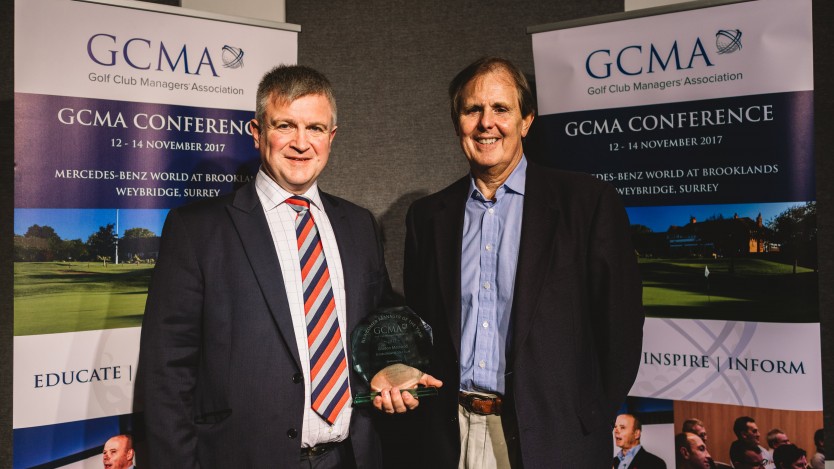 Gordon MacLeod was a member at St Ives for five years before he switched from a career in the defence industry to the role of club general manager in July 2016. His desire was to bring a period of stability, following a period that had seen a succession of managers come through the doors of the Cambridgeshire club.

MacLeod has certainly done that. His skillful stewardship has brought real results, both in membership numbers and building partnerships with organisations such as England Golf. It saw him become a popular recipient of the Newcomer of the Year award.

Congratulations on being named Newcomer of the Year. Was it a surprise to you?

It was. I knew I was up against a strong contender (Theydon Bois’ John Reeder) and, being new to the industry, it was difficult to gauge the job I was doing in comparison to what I’d done previously.

I am absolutely delighted to win and it vindicates my personal decision to change – halfway through my life – after a successful 30-year career in the defence industry. It also illustrates that people from outside the golf industry, who have had no previous experience, can bring something to the industry.

It was a risk for you to change careers. You had a comfortable life but you put that to one side to help your golf club…

I had never seen it like that before. I was at that stage in my life. I was well remunerated but that’s irrelevant to me because of the quality of life I’ve got now in doing something that I love so close to home. You can’t put a figure on that. I feel like I’ve won the lottery, quite frankly, in landing this job and my efforts thus far being recognised.

You’re clearly passionate about St Ives. It must give you great satisfaction to be rewarded for that by the GCMA…

It does but – and I would say this – this isn’t just on me. I am blessed with having a fantastic course manager, a terrific bunch of greenkeepers, hospitality and pro shop staff right down to Barbara the cleaner. We’ve got a fantastic team at St Ives and that’s something I am looking to move on to (developing) next. I’ll admit I’ve not given them the due focus that perhaps I ought to have over the past year because we’ve had higher priorities in getting the golf club back on a level footing.

It feels like these are exciting times at St Ives. You can look forward with confidence…

People should really keep an eye on us. We are never going to be anything more than a very high quality regional golf course. We don’t have delusions of grandeur. However, we have the potential to open some eyes and build upon our relationships, first and foremost with Titleist – with the National Fitting Centre – and develop our corporate partnerships.

We are in a thriving area, infrastructure and housing-wise, and it really is very exciting.

What do the next couple of years hold for the club? When we come back to Conference in 2019, what will you hope to tell us?

I would like St Ives to be seen as a place where golf is recognised as being part of the entertainment industry and as being a fun sport as well as a recreational pastime.

What we’re going to try and do is dovetail the sporting and fun aspects with the social aspects. We want to regenerate a club ethos, which encapsulates not just the members but the staff as well.

I would much rather see us put forward for Team of the Year, rather than as an individual!

Do you have a word for John Reeder? You were on the same introduction course together…

John is just one of life’s gents. He’s on his second career and I’m delighted that it’s working out for John as it is for me. Frankly, we’re splitting hairs between his achievements and mine. He’s done an outstanding job with significantly different challenges to me.

What the judges thought…

Gordon’s energy and attention to detail has brought huge results. Membership rose 14per cent between February and July, he established regular contact with England Golf and developed partnerships with local media companies to spread the word about the club. With the club also the home of Titleist’s National Fitting Centre and, with a centenary on the horizon in 2023, St Ives are moving from strength to strength.

What the sponsor said…

“I was hugely impressed by the overall standard and congratulations to all those nominated for the Newcomer of the Year award. St Ives is in safe hands and there is clear direction as the club moves forward. Gordon is to be congratulated for what he has achieved in his first year and is a deserved winner. He is a great example of someone who, with the help of the GCMA, was able to change the direction of his career path.” Richard Wood, director, Colt Mackenzie McNair