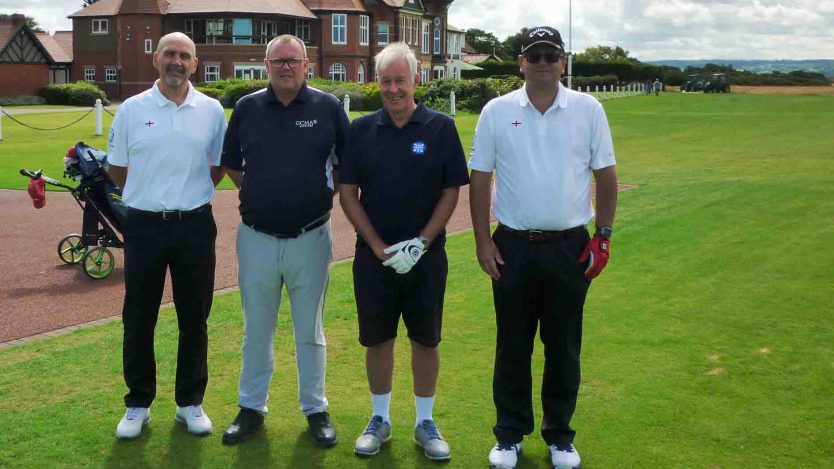 A look back at the English GCMA International Match season in 2021... By Cameron Dawson, GCMA English Match Co-ordinator As you may know, matches between the English GCMA and our counterparts in Ireland, Scotland, Wales and Sweden take place each year. This year, as I am sure you will not be surprised to hear, we only managed to play two of them, Wales and Scotland. But at least that was two more than last year. This has been a shame for National Captain Dave Carlisle who, although serving for two years due to the Pandemic, has only been able to Captain these two matches but he, as fully expected, performed his duties with honour and professionalism. We started off at Conwy Golf club away to the Welsh on a very hot Monday in July. The Welsh put a very strong team together and I have never seen as many scratch or plus handicappers in a team. We did have a couple of our own though, not least the newly appointed very young Assistant Secretary at Royal Lytham Lauren Oatley off +.8. The match was very closely fought and went down to the last match with the Welsh winning by 5 to 3. It will be England’s turn to host the match in 2022 and we shall be at Burnham and Berrow next July. We had a couple of late withdrawals for this match due to covid and a delayed operation and a big thank you to Mo Brooker and Frank Hodgkiss for stepping in at the last minute. We then moved on to Royal Liverpool in August to take on the Scots for the 67th Time. Again the standard of players was very impressive and after the two days it was another a close loss of 7 ½ to 8½, with a great comeback on day two after a first day beating of 2½ to 5½. We will be looking for revenge at Castle Stuart next August. I have taken up the role of English Match Co-Ordinator from the impossible to follow John “The Edge” Edgington and at the same time our new CEO Tom came into post. We made a few changes to the selection process and have focused on serving managers and wherever possible bringing in some new faces and trying to balance rewarding those long standing team members, which turns out to be impossible. Whilst I make no apologies for this position, I do realise that many of those who made themselves available could not be included and I am sorry for that. I also recognise that the retired members play an important part in the Association and maybe we should look at how they can be included in matches in some way, a thought for the future. The matches, after all, are another great way of networking between, managers, secretaries, clubs and nations. Listening to the conversations between the players again this year it is clear that this remains an important part of these matches and I...
This is member only content

« Older Have you made your nominations for the Manager of the Year awards?
Newer » The interview… Mark Allcorn